Vida Sacic is a designer, artist and educator whose work blurs the distinctions between these areas. Born and raised in Croatia, Sacic moved to the Midwest as an exchange student in her teens. She began her career by working as an Art Director in international advertising companies. In 2009, she earned an MFA from Indiana University Bloomington where she was introduced to design criticism, experimental design practices and letterpress printing.

During this time, she developed an interest in design teaching and curriculum planning for diverse student populations. She eventually accepted the position of Associate Professor of Art at Northeastern Illinois University in Chicago, where she authored and now coordinates the BFA Graphic Design program.

In addition to teachings and writing, Vida currently runs a studio in Ravenswood where she produces artwork using moveable type, creating prints, installations and animations. She actively exhibits in her home city of Chicago. Other recent exhibit venues include White Box Gallery in Portland, Oregon, DeVos Art Museum in Marquette, Michigan, Hamilton Wood Type Museum in Two Rivers, Wisconsin and The Center for Book Arts in New York City. 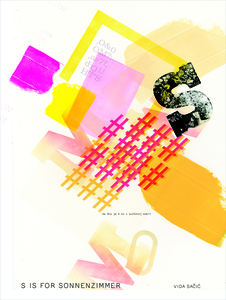