Paul Ressinger's first Chicago studio was in the stairwell of the old Auditorium Theatre, where he was working as a fireguard; and his first client was Mary Garden, who was performing there. Fired from Bertsch and Cooper because of erratic time-clock punching, he struck out on his own and became one of Chicago's premiere package and industrial designers, for Parker Pen, Montgomery Ward and Dr. West toothpaste. 27 Chicago Designer founder: 1936-1938. First STA President 1927, Fellow 1934, Honorary Member 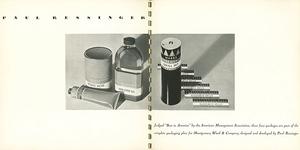 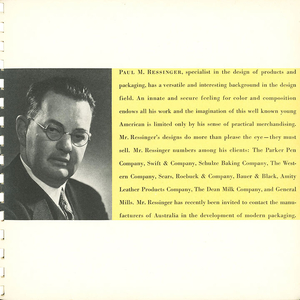