Harry Farrell, was a founding member of the 27 and continued through World War II when inserts were limited to one page. A former art director of Roche, Williams and Cunnyngham, he shared studio space with Ray DaBoll and DeForest Sackett at 6 North Michigan. A product and package designer, he was also a teacher at the Chicago Academy of Fine Arts. 27 Chicago Designer founder: 1936-1950 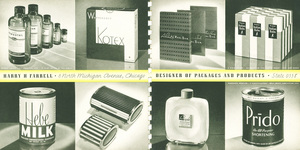